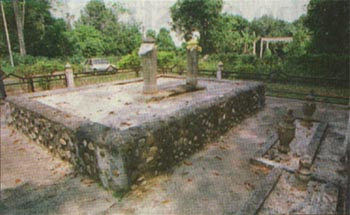 
ABOUT eight kilometres from Kubang Pasu's present administrative centre of Jitra lies the rustic Kampung Pulau Pisang where clusters of rambutan hang red and tantalising from tall trees and feisty cockerels rule the narrow lanes that wind and find their way between old wooden houses.

Given this scene it might be almost unbelievable that this village was once the capital of a State called Negeri Kubang Pasu Darul Qiyam whose ruler is credited with winning Kedah's freedom from the Siamese.

The story goes that when the Ligor (now Nakhorn Sri Tammarat) army of Siam attacked and took over Kedah in 1821, the Sultan of Kedah Sultan Ahmad Tajuddin Halim Shah II (1804-1845) was forced to flee first to Penang and then to Malacca. Several unsuccessful rebellions later, there did not seem much hope to wrestthe State from the Siamese until Tunku Anom hatched a clever plan.

Tunku Anom Tunku Abdul Rahman, the grandson of Tunku Ibrahim, Regent of Limbang and the nephew of Sultan Ahmad Tajuddin became well known after being selected as the chief of the delegation that sent tributes of Bunga Mas. In trying to recapture Kedah, the first step Tunku Anom took was to win the friendship of Phya Sina Nunchit who was the Siamese administrator of Kedah and the Ligor ruler's son. This Tunku Anom achieved by pretending to support Siam and Tunku Anom even gained a letter from the unsuspecting administrator recommending him to the ruler of Ligor.

While he was gaining the trust of Phya Sina Nunchit, Tunku Anom was also training Malay fighters in Gua Kerbau, Bukit Keplu which is located in present day Kodiang. Then, leaving his fighters to prepare for an assault on the Siamese in Kedah, Tunku Anom, armed with his recommendation letter, presented himself at the Ligor Court. Proving a loyal servant to the Ligor ruler and impressing with his skills, Tunku Anom also won the trust and admiration of the ruler.

While he was in Ligor, the Malay fighters launched their attack against the Siamese who were based in Alor Ganu, near Anak Bukit in Kedah. A struggling Nunchit despatched a letter to his father in Ligor seeking his assistance to put down the uprising. While support was sent to the aid of his son, the Ligor ruler offered to make Tunku Anom his representative in Kedah in the hopes of quelling the unrest there.

However Tunku Anom refused the offer, afraid that if he accepted the position, Kedah would forever be under the control of Siam. As the fighting continued, the Siamese army in Kedah again requested help but due to the rising cost of the war, the loss of lives and the onset of disease in the Siamese camp, the Ligor ruler finally relented and gave Kedah its freedom.

The tradition of sending Bunga Mas and Bunga Perak however continued but only as a sign of friendship.

Tunku Anom returned to Kedah a hero and for his bravery, was given control of 24 districts in the State, in an area called Kubang Pasu. He named it Negeri Kubang Pasu Darul Qiyam and Pulau Pisang the administrative capital.

Over the years, Tunku Anom developed a reputation for being a just and kind leader and Pulau Pisang flourished as a centre of trade and the padi industry. Unfortunately little remains to remind us of the old Negeri Kubang Pasu Darul Qiyam. Research papers in the State Library and Museum speak of a textile manufacturing centre that was set up near Pulau Pisang. Now this area is called Pulau Kain but there are no traces of the centre.

While Tunku Anom's tomb is well marked, Kampung Pulau Pisang has not been given the honour of a signboard telling of its part in the State's history. The Sungai Tunku Anom which was widened during Tunku Anom's reign also does not have a special signboard or markings to indicate that it is part of this fascinating story. Fortunately we still have some reminders in the form of old land grants issued during the existence of the State.

Tunku Anom ruled Kubang Pasu for 17 years and died in 1853. He was buried in Pulau Pisang, where his tomb can be seen to this day. It is said that Tunku Anom's grief over the death of his son, who had died before him, hastened the death of the ruler of Negeri Kubang Pasu Darul Qiyam.

Upon his death, Tunku Anom's grandson Tunku Ishak was installed as the new ruler of Kubang Pasu. However Tunku Ishak turned out to be cruel and refused to listen to his advisers. As support from the people waned, Tunku Ishak was forced to return Kubang Pasu to Sultan Ahmad Tajuddin Mukarram Shah III, Kedah's 23rd Sultan.
Posted by Katon Tin Ton at 7:08 PM